but what about lists to which I don't subscribe? As usual, agriffis
had an answer for searching both marc and gmane. The gmane search
requires less processing; it's just:

Using countify to determine who voted

For the trustee elections, it's important to have a record of who
voted because it is by voting that one becomes a member of the
Gentoo Foundation. Any election official, after countify --collect
has been run, can determine that list using the following one-liner:

That's what we used to determine the existing Foundation members from the
2005 trustee election.

In mcummings recent entry (http://www.datanode.net/?p=297), Mike
mentioned meeting Spider on -user long ago, and that he thought
that -user and -core were the only lists at that time. I didn't
think that was quite right, so I went digging through my own
Gentoo e-mail archives. The oldest -dev mail I have dates from
April 2001. (Back then I tossed most of my Gentoo mail, so I don't
know when I actually subscribed to -dev.) According to the wayback
machine, Gentoo at the time looked something like this:

Back when "every user was a hacker", the only lists were -dev and
-announce. With a bit of additional digging I discovered that
-user appears to have been created in Oct. 2001, while -core didn't
exist until Feb. 2002. I faithfully read -user until sometime in 2003, when
the amount of traffic on -dev, -core, and -user became truly overwhelming.
Nonetheless, I'm embarrassed that these days my only contact w/ -user
is though the threads posted in the GWN.

I'm Grant Goodyear (g2boojum), and if you're an eligible voter in the current
Trustees election then I'd like your vote.

Okay, that gets the boiler plate out of the way. Seemant did a classy job
of lauding the skills of the current candidates
(http://planet.gentoo.org/developers/seemant/2006/10/07/trustee_elections_2006_have_commenced), but he seems to have missed someone:

Seemant is the long-time developer who was once (in)famous not only for
breaking a vast portion of the tree with libpng, but also for the speed and
skill applied in fixing the breakage (along with spider's assistance, if I
remember correctly). Since then he has repeatedly proven to be responsible,
thoughtful, and willing to take on jobs that are necessary, but not necessarily
fun. For the last several months Seemant has been our lead contact with
Gentoo's legal team, and he has been doing an exceptional job of it.

As for what I think the priorities for the next year should be:

All that said, I'd also like to mention that if we can get the really
important items out of the way, then the Foundation, at least in my
opinion, should be a maintenance organization. It shouldn't be charting
the direction of Gentoo, because that's what the Council (and the devs,
first and foremost) are for. The Foundation's job is to collect and
disburse funds, provide a legal entity, and maintain and protect
Gentoo's intellectual property. That's pretty much it, and as such it
should be the least sexy part of Gentoo.

We're a bit late running the next Council election. The problem is that
our vote counting software, countify, has a bug somewhere that
produces incorrect results under obscure conditions. Shrug.
On the other hand, the voting (and vote collection) software does
work, so we may as well hold the election, and deal with counting the
votes when the time comes.

It seems that getent passwd is having issues with the number of
users that we have, so a new trick is needed for producing the file
of eligible voters:

It's been a good month for recipe tryouts from Cooks Illustrated. Last night
I made their incredibly simple recipe for roasted cauliflower. Even
Sarah liked it, and she doesn't like cooked cauliflower. The only
drawback is that it required a 475 F oven, which is not such a good
thing in Houston during the Summer.

A while back Sarah and I signed up as recipe tasters for Cook's
Illustrated. So far we've tested recipes for pound cake and
tonight's herb-crusted port roast. I usually claim that I don't
do "big meat", but pork roasts are reasonably inexpensive, and Sarah
loves pork, so I was willing to give it a try. I started working on it
about 4:45pm or so, and we had dinner about 8pm, and I think the time
was well worth it. We'll almost certainly make this recipe again.

It's a new, pyblosxom-powered blog, and it was a fair effort to get here.

What happened is that my wife asked me about having a blog. Naturally, I
thought: "Hey, Gentoo surely has lots of blog software, I can put together
something for my wife". That's true enough, and I took a look at what people
are using on http://planet.gentoo.org. I winnowed a good chunk of the field by
making an executive decision that I really didn't want to deal with mysql,
although sqlite would be fine. I eventually decided upon typo
(http://www.typosphere.org/trac/), and I spent some time configuring
lighttpd to properly render a typo blog. Typo's a really nice piece of
software, and it was fun to play with. I did run into some weird glitches
using typo with ecto (on Windows), which is what I was considering for my
wife to use, but otherwise I would happily recommend typo to people who
want elegant blogging software.

Ultimately, we decided to go with blogger for Sarah's blog. Blogger's
web gui for editing posts is really nice, and that bit of usability made
Blogger a clear winner for Sarah.

Meanwhile, for me typo seemed just a bit much. It's beautiful, but I'm
rather more fond of simple, and besides I'd really prefer to use
ReStructured Text (http://docutils.sf.net/rst.html) for markup
rather than html. Unfortunately, pyblosxom looks awful out-of-the-box,
but Will Guaraldi was nice enough to e-mail his "flavour" and css
stylesheet, which helped enormously, and things look much better now.
Best of all, I can hack on pyblosxom without too much trouble. (Indeed,
I've already fixed the rst plugin, which hadn't kept up with docutils,
and submitted a patch to the pyblosxom folks.)

Last Thursday we attended the second annual Woodlands wine walk. It was a tad less well organized than last year, but still lots of fun. We were able to sample over 50 wines, so I'm listing some of the wines that we liked best:


We should have others that were recorded in the wine walk "personal wine celler", but we haven't figured out how to extract them yet.

This is a first post with some funky formatting and an image: 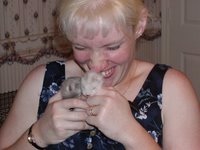 Getting typo up and running

Here's the first post of this shiny new blog.

Surprisingly, it took me fairly little time to get typo running w/ the built in Ruby server. I still have to get it moved over to lighttpd, but I'm
very happy!

Well, I now have typo working with cgi on lighttpd, but not yet with fcgi (which would be a lot faster).

Cool! It looks like I needed ruby-fcgi to get fast-cgi working properly on lighttpd, but now
it is!

All in all, type is really darn cool, and the AJAX admin interface is
fabulous.

To the best of my knowledge, we've never voted on the bylaws. In principle it
would suffice to have the trustees vote on it, but I'd really prefer that we
have a general vote on them. We can combine that vote with the vote for
trustees, presumably. That said, we may want to consider revising the bylaws
some. Last year we decided that all active devs who'd been with Gentoo for one
year were eligible to be foundation members, so our list of members is much
larger than that of the Python Software Foundation, which served as the source
for our current bylaws. For example, it seems unlikely that we're going to be
able to attract a quorum of 1/3 of the members and the required annual meeting.
Also, the current rule is that new members must be nominated by an existing
member, a membership application has to be filed by the person wanting to be a
member, and a majority of existing members must vote to approve a new member.
Assuming that last year's system was more in line with what we want, then
perhaps what we really want is a requirement that foundation membership be tied
to Gentoo devship (presumably continuing the must-be-a-dev-for-a-year rule). A
much more minor issue: the bylaws require a corporate seal; do we really need
one? I suspect there are other things we're going to want to change, too.

As far as elections go, it would be good to have new trustees in place before
our fiscal year ends (which is 30 June, I believe). This last year we started
with 13 trustees, and we finish the year having lost at least three, and
several others have contributed rather little during the last year. I'd really
like to see the number of trustees drop dramatically. The major issues for the
upcoming trustees are going to be: (a) moving the corporation to a state that
doesn't require a member to live there, (b) continuing to assert our
intellectual property rights (thanks Swift for all of your work on this area),
(c) move banking away from netbank, (d) make some sort of decision on copyright
transfer, and (e) get some sort of real budget put together, and (f) other
things that escape me right now. Of course, this list is fairly similar to last
year's list, which is not so good, although during the last year we saw a
complete transfer of all IP from Gentoo Technologies, Inc to the Foundation,
seemant, ramereth, klieber, and dmwaters all worked with our legal folks to
address copyright transfer issues, but it's such a complicated problem that we
still lack a definitive solution (I believe), we have a funding process in
place (thanks to spyderous, if I recall correctly), and we even have the Gentoo
name registered (in the US) as a registered trademark. Nonetheless, I really
think the foundation would benefit from having a much smaller number of
trustees, like five, with an expectation that if a trustee becomes inactive a
new trustee takes that person's place in a reasonably short period of time.

I'm sure there's more that I should mention, but that's all that I can think of
right now.

Just a note that I'm still around. Indeed, I've clearly decided that I now have
too much free time on my hands, since I've volunteered to be a mentor for
Summer of Code students. It should be fun!

Foundation elections should be happening sometime "soon", which means a lot
needs to be done to make that process be not quite so dead. I'll have an update
on that later this weekend.